(Appeal to a) False authority

Aggravated form of an appeal to authority-argument where the authority is flawed in some way or even invalid.

The Earth is flat, because that is what the Bible says.

There are at least two issues with this statement: Firstly, the Bible is not actually an authority in planetary shapes (false authority), and secondly that actually no clear reference to the shape of the Earth can be found in the Bible (false reference).

As already described in the article on appeal to authority, a reference to an authority is usually problematic, since also authorities they can be wrong. However, numerous exceptions are listed there under which they may be valid and useful.

This article, however, is concerned with forms of the authority argument that are invalid in any case because necessary conditions have been disregarded.

This shall be exemplified by the following alleged Einstein quote:

Albert Einstein says: We use only 10 % of our intellectual capacity.

A fundamental condition for accepting the reference to an authority as a positive contribution is surely that the authority is has actual authorative knowledge (or normative powers) in the subject.

With regards to the above quotation this means: Albert Einstein certainly counts as a luminary in his field of expertise, namely in Theoretical Physics; in subjects that seem related to this quote, e.g. Neurology or Educational research, this does nto hold and there is no indication that his opinions on subjects in these fields of research are in any way more weighty or significant than those of any other interested layperson.

A variant thereof are authorities which actually have expertise or normative powers in a related field, but illicitly extend this to another area. Such an argument is weak, especially if this is used to argue against some real authority in this field.

For example while the (usually very good) education that medical doctors have enjoyed gives them a position of authority when it comes to the specific treatment of their patients, according to the state of the art in research (and their recommendations should be taken serious in these cases), this does not extend to a situation where a physician publicly contradicts the state of research that is done by more specialized medical researchers.

That means that while it is within the expertise of a general physician to recommend specific patients to forego specific vaccinations because of their medical history. It is not their field of expertise to generally recommend against vaccinations.

Note: It is well within their right to freedom of expression that physicians can freely voice their opinions on vaccinations. However, these should of course then be considered opinions and not authoritative statements.

A particularly problematic mode of argumentation is to reference a (real or supposed) authority without actually naming it. THis is typically done by using phrases such as “experts say…” or “science has established that…”, etc.

These kind of anonymous authorities are especially widespread in advertising: There is hardly any toothpaste or dietary supplement that does not refer to some ominous “scientific” or “clinical studies“, which are then not specified in more detail.

Just as important as the correct authority is the question of whether the quote is also correctly reproduced.

An all too large number of quotes that are supposed to come from celebrities such as Albert Einstein, Abraham Lincoln or Socrates are in fact completely fictitious.

We do not know whether Einstein actually ever said the above-mentioned quote – what is certain is that it is not originally from him: similar quotation actually circulated long before Einstein. In any case, it does not appear in any of Einstein’s publications or interviews. So one can assume that it is a wrong quotation.

But there is another aspect: even a correct quotation of a true authority can be falsely reproduced: without knowing the precise context, such a quotation can say exactly the opposite than what it was originally meant to say.

The aforementioned “Einstein quote” is ambiguous here: does “our intellectual capacity” mean the intellectual capabilities of individuals, or the capacity of a society as a whole to realize its intellectual potential? The statement is readily taken to support both meanings, but at least one of them is probably not what the author (whoever that was) had in mind.

It is striking that a lot of questionable quotations are attributed to the same people. Obviously these are associated with characteristics, which seem to make such sayings appear particularly credible. To describe this effect, the term “quote magnet” is often used.

Examples of such “quote magnets” are, besides Albert Einstein, for example Winston Churchill, Friedrich Nietzsche, or Socrates. But also other celebrities of the past or the present.

Especially if a saying seems to fit all too well with a stereotype associated with the respective person, it might be worth inquiring whether it is actually authentic. All too often it is not.

Appeals to false authorities are particularly popular in advertising: There is hardly a product or service that is not advertised with celebrities: Soccer coaches advertise car brands, news anchors recommend convenience foods, or athletes mobile phone contracts.

In few of these cases there is actually any reason to believe the celebrities portrayed in advertising have any better knowledge of the quality of the advertised products above any random person. Nevertheless, the leap of faith we readily give to such people will still help sell the product.

Especially on the social media, all kinds of “quotes” are circulating, which are attributed to (mostly long-dead) celebrities - such as the above-mentioned alleged Einstein quote. These are brought out again and again, in order to support a position whichever way. The fewest of them stand up to a closer inspection. So also the following one: 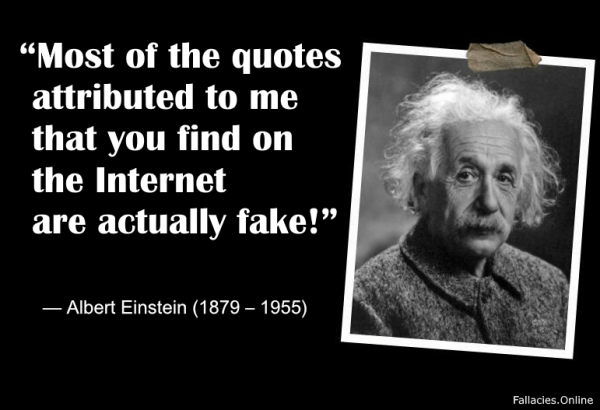 Note: As a means of political disinformation, there are also repeated attempts to pin alleged quotes on political opponents, which are intended to show them in a bad light.

Particularly in the case of sensitive political or social topics, one should therefore be especially careful and thoroughly check whether a quote can really be substantiated in this form or whether a statement has possibly been taken out of context.

This danger of falling for such “alternative facts” is particularly great in situations in which people tend to deal with information rather uncritically. This includes, among other things, information that we receive from friends and relatives (e.g., via social media), and especially information that seems to confirm an already existing narrative and/or one's own existing opinion (☞ confirmation bias).

At the very least, one should avoid further sharing dubious quotes and thus possibly contributing to the spread of false information.